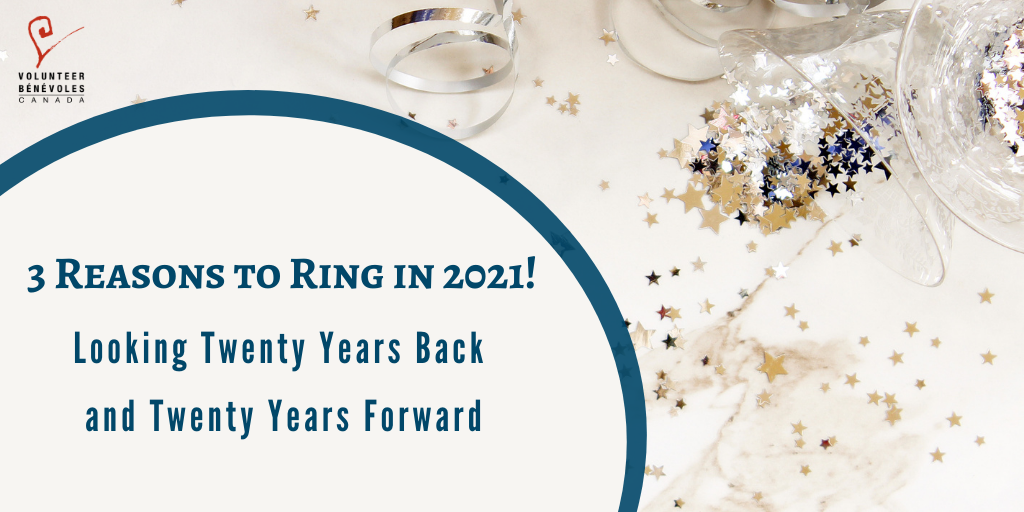 2021 marks the 20th anniversary of 3 significant milestones for the non-profit and charitable sector in Canada: (1) the International Year of Volunteers 2001; (2) the launching of the first Canadian Code for Volunteer Involvement; and (3) the signing of an Accord between the Government of Canada and the (voluntary) non-profit and charitable sector. 2021 is also a year to equip and position our sector for the next 20 years, as we restore, regroup, rethink, and renovate our space and place in society, as we all navigate the impact of the pandemic and take action on racism and social injustice.

When I think back to the beginning of the millennium, I think of a time filled with promise, inspiration, and collective confidence, as the non-profit and charitable (voluntary) sector and the Government of Canada were bringing to life the Working Together[1] report that had been co-created by 3 Joint Tables[2] and laid the foundation for the Voluntary Sector Initiative[3]. These joint tables were established to:

During the International Year of Volunteers 2001[4], the theme for National Volunteer Week in Canada was “The Value of One, the Power of Many” and the world was shining a spotlight on the enormous contributions of volunteers and expertise of those leading volunteer engagement. This theme emphasized that a single act by just one person can make a huge difference and recognized the changes that happen from many individual acts or the collective action of many. To mark the occasion, Volunteer Canada released the first Canadian Code for Volunteer Involvement. Led by Liz Weaver, as her anchoring project in the McGill-McConnell Master of Management in Voluntary Sector Leadership Program, the Code articulated the values, principles, and standards of practice for volunteer involvement.

“Volunteer involvement is fundamental to a healthy and democratic society in Canada. It promotes civic engagement and active participation in shaping the society we want. It encourages everyone to play a role and contribute to the quality of life in communities. Volunteer involvement is vital for strong and connected communities. It promotes change and development through the collective efforts of those who know the community best. It identifies and supports local strengths and assets to respond to community challenges while strengthening the social fabric.”[5]

In December 2001, the Accord between the Government of Canada and the Voluntary Sector was signed. Co-created by leaders in the voluntary sector and senior federal officials, it articulated the complementary roles of both sectors, shared principles, terms of engagement and mutual accountability.  The non-profit and charitable (voluntary) sector and the Government of Canada had also cleared a path forward to collaborate on our shared interest in the quality of life of Canadians, the vibrancy of communities, and in playing our part in advancing global issues.

“The Government of Canada and the voluntary sector share a long tradition of joining forces to achieve common goals. Both believe that there is benefit in formalizing the relationship with an Accord that will facilitate greater mutual understanding and more co-operative ways of working together.”[6]

Over the past few years, the spotlight has once again been shone on volunteers who have stepped up to respond to floods and forest fires, and now the pandemic. We have seen the need to adapt and reinforce standards of practice to provide safe and quality services to vulnerable people. The importance of guiding principles for collaboration between the public, private, and non-profit sector working together has also been highlighted.

Interest in our sector and in citizen engagement has resurfaced once again. In June 2019, The Special Senate Committee on the Charitable Sector released its report, Catalyst for Change: A Roadmap to a Stronger Charitable Sector. Among the 42 recommendations, there is a call to create a national voluntary action strategy. There are several recommendations related to the relationship between government and the sector, the capacity of the sector, and the regulatory and legislation environment.  The Canada Revenue Agency (CRA) established the Advisory Committee on the Charitable Sector to address some of the legislative issues related to interpretation and administration of the Income Tax Act. Businesses have been finding innovative ways to co-deliver community programs with non-profit partners.

Join Volunteer Canada and guest Liz Weaver on December 2nd at noon, as we reflect on these milestones and look ahead to lay a strong foundation for the next 20 years. A sneak peak at the 2021 National Volunteer Week theme will also be revealed prior to its official release on International Volunteer Day, Saturday December 5th.

[1] Government of Canada & the Voluntary Sector Joint Table (1999), Working Together.

[2] The 3 Joint Tables were co-chaired by a senior public servant and a voluntary sector leader and engaged 4 members from each sector. The final report, Working Together, laid the groundwork for the Voluntary Sector Initiative.

[3] The Voluntary Sector Initiative was launched in 2000.

[4] The United Nations had declared 2001 the International Year of Volunteers and Volunteer Canada worked with the Government of Canada on the Canadian celebrations.

Paula is the President and CEO of Volunteer Canada.
[email protected]
http://www.volunteer.ca